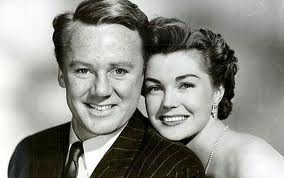 On screen he was cute, with red hair and freckles, usually playing the part of the boy next door, or the soldier who lived down the street. During the 1940s he was a Hollywood heart throb besieged by legions of screaming bobby-soxers. Off screen, he always wore his trademark red socks.

On screen he personified the wholesome, cheerful boy next door, always smiling and eager. Off screen he was a gay man living a lie perpetrated by MGM, who insisted he get married in order to quell rumors of his sexual orientation.

Van Johnson (1916-2008) was the last of the big screen stars from the Golden Age of Hollywood when he died at age 92. He could dance and sing and enjoyed a solid career as a movie star, earning praise for his roles in both musicals and dramas. Photo at top of post is with co-star Esther Williams.

His marriage and eventual divorce, however, garnered as much press as his career as a Hollywood star. MGM studio boss Louis B. Mayer bribed Evie Wynn into marrying Johnson in 1947. Johnson had been caught engaging in gay sex acts in public urinals, so MGM needed to protect its investment by having Johnson marry. Keenan Wynn was Van Johnson’s best friend, and when Mayer ordered Johnson to wed, Johnson replied that the only woman he would marry was Evie. Mayer took Evie aside and told her that unless she married Johnson, he wouldn’t renew her husband Keenan’s studio contract. Years later Evie said, “I was young and stupid enough to let Mayer manipulate me.” Keenan and Evie Wynn divorced solely to allow Van Johnson to marry Evie. 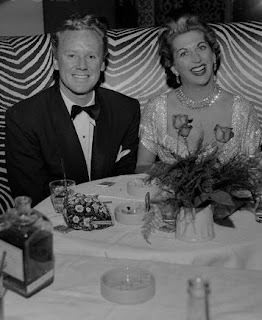 Many of his fans were alienated when Johnson wed Evie the day after her divorce from Wynn (photo at left), while those who were aware of Johnson's sexual orientation wondered how the marriage could be genuine. Nevertheless, they remained married for twenty-one years and had a daughter. As well, Johnson helped raise Evie’s two children from her marriage to Keenan Wynn. In fact, it was Johnson’s stepson Ned Wynn who outed him when Ned’s 1990 memoir “We Will Always Live in Beverly Hills” recounted the salacious details of his mother’s divorce from Johnson.

Thirteen years into the marriage (1960) Evie sued Johnson for divorce, citing cruelty and grievous mental suffering. A few weeks later she sued Wynn for fraud and breach of contract in their property settlement and for failing to pay child support. They briefly reconciled, and Evie traveled to London with Johnson in 1961, when he starred in the stage musical, The Music Man. They separated again in 1962, after Johnson entered into a scandalous affair with the show’s young lead male dancer. Their eventual acrimonious divorce was made final in 1968. Johnson called it “the ugliest divorce in Hollywood history”.

Twenty-five years earlier Johnson had been cast as the young pilot in A Guy Named Joe (1943) with Spencer Tracy and Irene Dunne. Midway through the film's production Van was involved in a near fatal car accident that left him with a metal plate in his forehead. Laid up for weeks, MGM had planned to replace Johnson in the film by recasting another actor. Both Dunne and Tracey insisted the production wait for Johnson's return. Had those two stars not intervened, Van Johnson might never have become a movie star, because the film was a huge box office success. 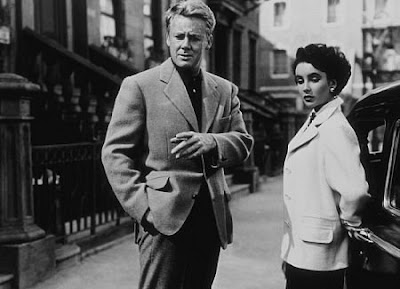 The next year Van Johnson was given the lead in Thirty Seconds Over Tokyo (1944), a smash hit after its release. By 1945 Van Johnson was on the cover of every movie magazine and was tied with Bing Crosby as the top box office star of the year. Van was cast with June Allyson and Esther Williams in a number of popular, frothy musicals and comedies. By the time his contract was up with MGM in 1954, he had appeared in In the Good Old Summertime (1949) with Judy Garland, and State of the Union (1948), Battleground (1949) and The Last Time I saw Paris (1954) with Elizabeth Taylor (photo above). After leaving MGM, where he made 50 films, Johnson won acclaim for his appearances in The Caine Mutiny (1954) and Miracle in the Rain (1956). 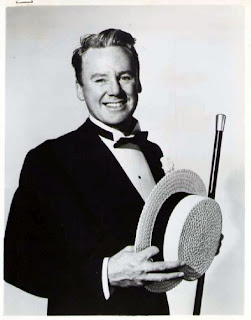 After his Hollywood star began to fade, Van Johnson found a second career in television work. In the 1970s he began a career in summer stock and dinner theater. When he turned 60, he told a reporter that he had beaten cancer twice and was so booked up with summer theater jobs that he never made it home to his Manhattan penthouse and his two cats. At 69 he went back to New York and Broadway to replace Gene Barry as Georges in La Cage aux Folles, playing the role for a year. At 75, with his strawberry blond hair turned white, he toured as Captain Andy in Show Boat. Van Johnson's long time companion and partner was Allen Foshko, who was also his business manager. 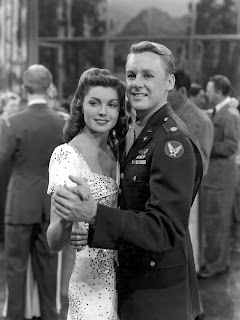 A Guy Named Joe (1943, watch YouTube clip below) was the first of five films Esther Williams and Van Johnson made together (shown in photo). This movie put Van Johnson on the Hollywood map, but it almost didn't happen. Shortly into production Johnson was in a terrible automobile accident that crushed part of his forehead and nearly killed him. The studio wanted to replace him, but Spencer Tracy threatened to walk out if they didn't wait for Johnson's recovery. Tracy and MGM reached a compromise where the studio would push the shooting schedule back several months to accommodate Johnson; in return, Tracy and director Victor Fleming agreed to stop giving co-star Irene Dunne a hard time on the set.

Apparently Tracy and Fleming had taken an instant disliking to Dunne and teased her relentlessly, sometimes driving her to tears. Dunne later recalled A Guy Named Joe as a difficult shoot full of tension before Johnson's accident. She heard rumors of being removed from the picture altogether before she, her co-star and the director worked things out. While Johnson recuperated in the hospital with a metal plate in his head, Tracy and Dunne used the time to re-shoot several scenes since earlier rushes showed their visible tension onscreen. Van Johnson, who went on to become a big MGM star, remained forever grateful to Spencer Tracy for influencing the studio to wait for him to complete the picture. "Without Tracy," he later stated in an interview, "my career could have ended then and there."

Ironically, it was Johnson's injuries sustained on this movie that prevented him from serving in the real World War II, leaving him to rise to fame during the 1940s in the absence of many of Hollywood's established leading men. For Irene Dunne, who was already obligated to work on her next picture The White Cliffs of Dover (1944), the delayed filming schedule of A Guy Named Joe (view film clip below) meant working double duty as an actress on both.