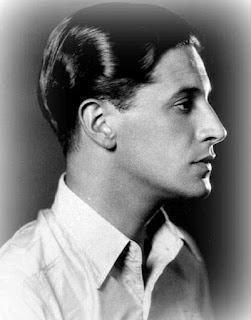 Born with the name David Ivor Davies in Wales, Ivor Novello was one of the most popular entertainers of the early twentieth century. He was a noted composer, singer, playwright, and actor. Most considered him a rival to Noel Coward, who was six years Novello's junior. Coward later wrote that he was envious of Novello’s handsome appearance and had sought to copy his glamorous, world-weary style. Coward and Novello went on to become good friends. In fact it was actor Robert (Bobbie) Andrews, Novello's life partner for 35 years, who introduced Novello to the young Noel Coward. Bobby Andrews and Novello were later to appear together in many of Novello's plays and musicals.

Novello’s first success was as a songwriter. At age 21 he wrote the music for Keep the Home Fires Burning, an immensely popular sentimental song of the WW I era that brought Novello money and fame.

In the 2002 film Gosford Park, the guests at a country house are entertained by Novello (played by Jeremy Northam), who performs on the piano. Six Novello songs were used in the soundtrack.

While Novello continued to write scores to songs, musicals and revues, he developed a career as an actor. His good looks, talent and suave style led to success on both stage and screen; he was considered England’s first great male silent film star, a British “Rudolph Valentino”. Like Coward, Novello enjoyed simultaneous careers in both Great Britain and the U.S. Novello earned enough money to buy a lavish, sprawling country house near Maidenhead in 1927. Named Redroofs, the property was the setting for extravagant, unconventional entertaining, often characterized by untempered homosexual excesses. Novello later bought a house in Jamaica where he and his partner Bobby Andrews went on holiday together. 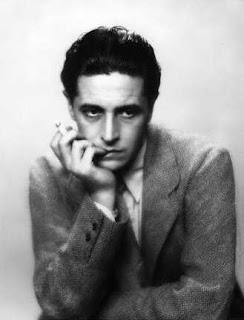 Novello hit his stride in the 1930s, writing music for Drury Lane shows that blended musical comedy with opera, operetta and modern and classical dance. Novello frequently starred in his own shows. Unfortunately, he spent a notorious four weeks in prison during WW II for misuse of petrol rationing coupons, a serious offense at the time, and the trauma of this incarceration had serious and lasting effects on his life. The sentimental song We’ll Gather Lilacs was a huge hit (1945) during WW II, first appearing in Novello’s stage show Perchance to Dream.

Novello remained the most consistently successful writer of British musicals until Andre Lloyd Webber came onto the scene in the 1970s.

Novello died suddenly of coronary thrombosis in 1951, at the age of 58, at his London flat in the presence of Bobby Andrews. Thousands lined the streets to the funeral service, which was broadcast live on radio. For the past fifty-four years, the British Academy of Composers and Songwriters' annual awards have been nick-named the Ivors, in honor of Novello. 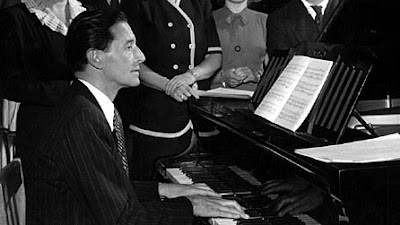 Trivia:
• Novello never allowed his left profile to be photographed or filmed.
• It was Novello who came up with the phrase, “Me Tarzan – You Jane.” Novello developed the dialogue for the 1932 film Tarzan the Ape Man.
• Alfred Hitchcock cast Novello in one of his earliest films, The Lodger (1927, entire film at end of post).
• When Noel Coward got news of Novello's sudden death, he said "Please understand and forgive me, but I am too shattered by the news of Ivor Novello's death to write an estimate of his work or his personality that would do justice to either. We have been close friends for thirty-five years, and my feelings at the moment are too private and too unhappy to be put into words."

The web site for the Ivor Novello Appreciation Bureau can be found at this link:
www.ivornovello.com 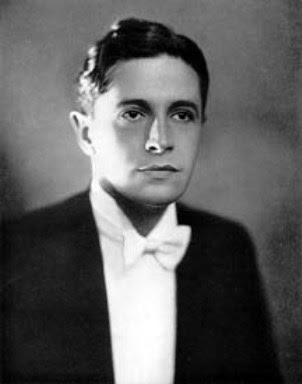