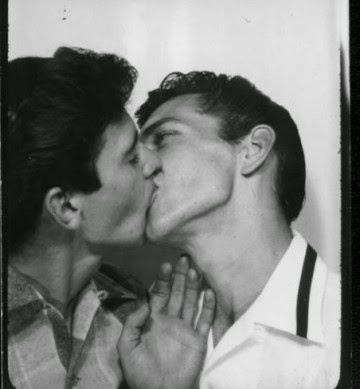 This photo booth portrait was taken in California in 1953, at a time when laws allowed police to target homosexuals, who could be arrested for holding hands in public or wearing clothing of the opposite sex. A photo such as this could have gotten the men arrested.

Time magazine recently reported that the man shown on the right was J. J. Belanger, a Canadian born in 1925 who served in the Royal Canadian Air Force from 1942 to 1944. He then moved to California, where he was one of the founding members of the Mattachine Society, an early LGBT organization which originated in 1950 in Los Angeles. Their initial name of Society of Fools was replaced by Mattachine Society, after Medieval French secret societies of masked bachelors who, through their anonymity, were empowered to criticize ruling monarchs with impunity. The name change was meant to symbolize the fact that gays were a masked people, unknown and anonymous.

Throughout his lifetime, Belanger was a devoted collector of historical LGBT artifacts and materials. This photograph of him is now part of the ONE National Gay & Lesbian Archives at the University of Southern California Libraries (Los Angeles), the largest repository of LGBT materials in the world, which includes letters, notebooks, and audio recordings owned by Belanger. Many of Belanger's effects relate to gays in the military and AIDS activism.

Kyle Morgan, of the ONE Archives at the USC Libraries, recently wrote, “Here, in the midst of the 2014 (gay) pride season, what remains so remarkable and moving about this particular image is how quietly radical it feels all these years later. Belanger and another man have found a private safe space in the unlikeliest of places, an ordinary photo booth, where they felt so at ease...(that) they could kiss each other far from the prying eyes of a disapproving public.”

Sources: Time Magazine and Wikipedia
Posted by Terry at 6:36 AM