Charles Jackson: The Fall of Valor

In the 1940s bisexual writer Charles Jackson wrote The Lost Weekend (1944), an autobiographical novel that chronicled a struggling writer's five day drinking binge. It earned Jackson lasting recognition and income, and was subsequently translated into 24 languages. Paramount Pictures paid for the rights to adapt the novel into a film version, which won four Academy Awards. However we are concerned with Jackson's second published novel, titled The Fall of Valor (1946), which takes its name from a passage in Herman Melville's Moby-Dick. Set in 1943, it detailed a male professor's obsession with a young, handsome Marine.

Excerpts from a review by Richard Amory: 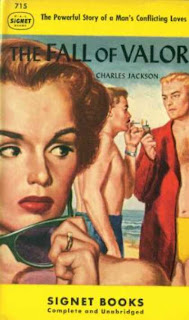 If somebody ever dares to write a history of the gay novel and its development in the last fifty years or so, he will have to save a place of utmost honor for Charles Jackson’s Fall of Valor. Published in 1946, the action is set in 1943, at the height of the war, and reading it today is an exercise in almost unbearably bittersweet nostalgia.

Surprisingly, it holds up well after all those years. Jackson’s hero is an English professor named John Grandin, who at age 44, has drifted blindly into several impasses – one in his marriage, another within himself. The crux of the matter is his own latent homosexuality, and the story follows his recognition of the problem; what he does about it, and what it does to others. On vacation with his wife in Nantucket, they meet a stunningly handsome Marine animal named Cliff, a genuine war hero, pathetically anxious to please, naïve, buddy-buddy, who badly wants to rub Grandin’s back with sun-tan oil.

Jackson captures the national man-worship of the forties with almost heartbreaking clarity. It was a licentious era, a time of quickening sexual awareness when all sorts of unlikely people must have felt homosexual stirrings in their loins, but, ultimately, a time that had to – was forced to – allow itself only the briefest peek at the possibilities of love between two men. Jackson was the most honest gay writer of the decade. Within the severe limitations set for him by the taste and sensibility and publishing canons of the 40s, he makes some powerful statements that are worth constant repetition today, and were revolutionary at the time:
1) Nobody consciously chooses to be a homosexual.
2) You can’t equate homosexuality with self-indulgence
3) There is degradation on both sides of the fence.
4) There are damned few sexual absolutes, even in the Marine Corps.

Keep your eyes peeled for copies is used book stores. Fall of Valor is a collector's item.

Note from your blogger:
Amazon has dozens of used copies for sale at bargain prices.

Note about Richard Amory:
Richard Amory wrote eight gay novels in the 1960s and 1970s. Song of the Loon (1966), was among the first queer novels to depict a positive and affirming portrayal of gay life.

Jackson’s first published work was a short story called “Palm Sunday” (1939). It dealt with two adult brothers who recalled being abused by an older male church musician when they were in their early teens. Since much of Jackson’s writing was autobiographical, many of his stories and novels dealt with alcoholism and repressed homosexuality. His writings about “outing,” gay-bashing, molestation, thrill killers, addiction, repressed sexuality and media sensationalism are more relevant today than when they appeared sixty years ago.

After several attempts at sobriety, followed by the inevitable relapses into alcoholism, Jackson became estranged from his wife in 1965 and rented an apartment in New York City that he shared with his lover. Jackson later committed suicide by an overdose of sleeping pills in his room at the Hotel Chelsea in New York City on September 21, 1968. He was working on a novel at the time.

In 2001, Mark Connelly published “Deadly Closets: The Fiction of Charles Jackson.” University Press of America (available through Amazon.com). As well, The Fall of Valor is included in Anthony Slide’s “Lost Gay Novels: A Reference Guide to Fifty Works from the First Half of the Twentieth Century” (2003), The Hayworth Press.
Posted by Terry at 12:16 AM