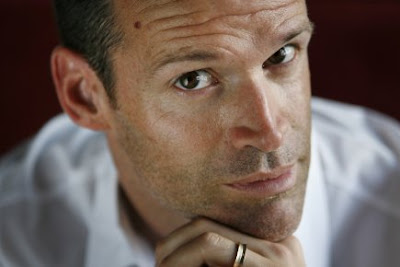 Canadian Olympic gold medalist swimmer Mark Tewksbury turned forty-three years old this year. Born in Calgary on February 7, 1968, he realized he was gay in elementary school. To avoid facing up to it, he poured all of his energy into swimming. Some of his junior high classmates vandalized his locker with anti-gay slurs. Without coming out to them, Mark told his parents about the attack, who told the principal, who decided the best solution was for Mark to change schools. When boys at his new school discovered why he had transferred, they made his life even worse. Tewksbury considered suicide. 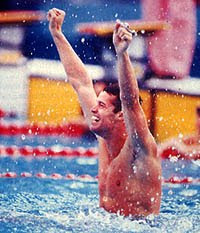 Swimming was his salvation, and by age seventeen he was one of the best in Canada. At the 1988 Olympics when he was twenty, he won a silver medal for relay and placed fifth in backstroke. At the 1992 Olympics in Barcelona, he won the gold and broke the world record for 100m backstroke. At age twenty-four, still closeted even to his family, he was named Canada's male athlete of the year, appeared on the cover of Time, and was inducted into three halls of fame.

At the end of 1998, two months before he turned thirty-one, he finally came out, with mixed results. Tewksbury lost lucrative speaking engagements and a few endorsements, but was hailed for his bravery and character. He went on to become a founding member of the Gay & Lesbian International Sports Association, sponsors of the 2006 and 2009 Out Games. During the Athens and Beijing Olympics, Mark covered swimming for Canadian Broadcasting Corp. Today he is a gifted and much sought after motivational speaker.

Tewksbury, who now resides in Montreal, Canada, has written an engaging book: Inside Out: Straight Talk from a Gay Jock (2006), in which he lays bare the infighting among organizers of the Olympics, as well as the Gay Games and newly formed Out Games. He resigned from the International Olympic Committee over their cronyism and lack of accountability, accusing the IOC of rampant corruption. He was also part of a group of former Olympic athletes who pushed for the resignation of IOC President Juan Antonio Samaranch. Only months after the scandal surrounding the Salt Lake City Games broke, Tewksbury became prominent around the world as a critic of the IOC and demanded reforms to the system. Available in hardcover, paperback and Kindle editions. 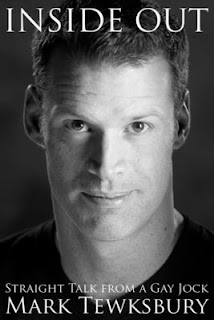 In this book, Tewksbury eloquently sums up his ability to win Olympic gold in the 1992 Olympics this way: “I gazed around the room slowly. The best swimmers from Russia, Cuba, the United States, Spain, Germany and France were in front of me. And I was different. I was the fag. And in that moment I owned my truth completely. I thought, ‘If these guys knew how hard it was for me to get here, they wouldn't believe it. They have no bloody clue what I have been through. Or how strong I am.’ ”

He also revels embarrassing, humorous and often unflattering things about his personal life, including his involvement in a serious three way relationship with a gay couple and his persistent pursuit of a professional male escort. Not to mention that, as a child, he liked to dress up in his grandmother’s clothes.

Spoiler alert! The book ends with Tewksbury being contacted by one of those (now grown up) junior high school classmates who had vandalized his locker, painting "FAG" for all to see. He revealed to Tewksbury that at the time none of the boys knew (or even suspected) that Mark was gay. They just did it for sport and chose Mark's locker at random to be the victim of a schoolboy prank. But after reading about the incident in his now famous classmate's book, "Inside Out," the resulting guilt made him contact Tewksbury to correct the false perception of the act of vandalism -- decades of trauma and paranoia over a misunderstanding.
Posted by Terry at 6:14 AM