He neither confirmed nor denied his homosexuality, but Eva Gabor, his long-time beard, provided enough cover that he had access to the Reagan White House (he was particularly close to Nancy, with whom he shared a birthday, July 6), and he was an honorary pallbearer at the funeral of President Ronald Reagan in 2004.

As a teenager he was a church organist and piano prodigy, but at was his smooth singing voice that launched a career as an entertainer. During the 1960s he hosted his own TV talk show, usually crooning a song or two between guests. He created wildly popular TV game shows, such as Jeopardy and Wheel of Fortune. He wrote the theme music used on Jeopardy. He also owned casinos, hotels and resorts. He raised thoroughbred horses. He owned Paradise Island in the Bahamas.

But there was a dark side. Like most high profile gay men of his era, he married, but his severely closeted gay life produced a paranoia that kept his team of lawyers busy shooting down rumors and threatening those who spoke or wrote about his lurid gay life, which often included prostitutes. He was particularly threatened by openly gay men, more often than not firing his own employees who dared live openly and honestly gay lives. Two same-sex palimony and sexual harassment lawsuits in 1991 brought questions about his sexuality to national prominence. He dealt with them by beginning a high profile relationship with actress Eva Gabor, making sure photographs of them as a couple appeared everywhere. Nice try.

Shown with beard-for-hire Eva Gabor in the early 1990s, at the height of the media frenzy over the same-sex palimony and sexual harassment lawsuits. 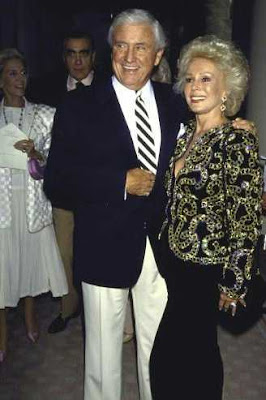